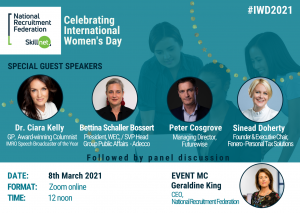 A little bit different from our normal format this year but we still have a superb line-up of keynote speakers for the day!

Dr Ciara Kelly is a GP, Award-Winning Columnist and IMRO Speech Broadcaster of the Year.

She qualified as a Doctor in 1997 from UCD with First Class Honours in General Practice. She is currently a partner in Carrig Clinic Family Practice, in Greystones and also teaches General practice to medical students and Post Graduate Doctors for both UCD and Trinity College Dublin. She was also a Former Assistant Director of GP Training in UCD.

She was also previously the Medical Expert on RTÉ’s IFTA award-winning Operation Transformation for five seasons. She was also a presenter on RTE’s Doctors on Call which featured a specialised team of doctors, medical professionals and reporters who brought the ultimate guide to health and wellness.

In 2017, Ciara presented a three-part documentary series on RTÉ called Body Shopping. The show explored the highs and lows of
cosmetic surgery and delved into the reasons why people want to undergo such procedures.
She was previously the Resident GP on Virgin Media’s The Morning Show for three years. She is also a regular contributor to other TV shows including Ireland AM, the Saturday Night Show, Cutting Edge, The Restaurant and  Claire Byrne Live. Ciara has presented a number of episodes of ‘The Sunday Show’ on Virgin Media.

Ciara has also presented her show Alive and Kicking on Saturday mornings on Newstalk and also Lunchtime Live. She spent a year and a half as a resident weekly panellist on its anarchic current affairs show The Friday Right Hook and went on from there to have her own weekly slot on Monday evenings, The Right Hook Health Check (described in The Irish Times Radio Review by Mick Heaney as ‘so good it deserves cult status.’). She currently presents ‘Newstalk Breakfast’ with Shane Coleman on Newstalk.

She first started to write for the Sunday Independent in 2008. Her debut article won a Medical Journalism Award and she now has a popular weekly column called Doctors Orders in The Sunday Independent. Not solely focused on medical topics and issues, Ciara also contributes to the paper on a wider variety of topics including Finance, Politics, Social Justice, Pop Culture and more.

Ciara is a regular keynote speaker for health conferences, public speaking engagements and corporate events. She is outspoken on many health issues in the media to highlight patient issues and rights advocate.

Bettina Schaller Bossert is the President of the World Employment Confederation, elected in October 2020. Besides this role, she also heads the Group Public Affairs activities for the Adecco Group, headquartered in Zurich, Switzerland.

Bettina is also Vice-Chair of the OECD BIAC ELSA Committee and a member of the B20 Future of Work & Education Taskforce. She is also a Steering Group Member for both the World Economic Forum (WEF) “Center for New Economy & Society” and the Global Apprenticeship Network (GAN).

She is also a 2011 Young Leader of the American Swiss Foundation (ASF) and President of the ASP Young Leader Alumni Foundation Board. Bettina has been named a ‘Staffing 100 Europe Influencer’ and into the International 50 of the “Global Power 100 – Women in Staffing’ since 2017.

Peter Cosgrove is Managing Director of Futurewise, a future of work insights company and has over 20 years experience in Staffing companies like Cpl, Hudson and Robert Walters. Peter is on the steering committee of the 30% club which promotes gender diversity and Vice Chairman on the Board of the mental health charity Aware. He has published 2 books “Fun Unplugged” and “Family Fun Unplugged”, books designed to take families off their digital devices.

Starting as a one woman company at the age of 28, Sinead has successfully grown the company to a team of 40 today, who handle over €100 million in payments annually for their professional service contractor client base.

Sinead is a Mum of two and was recognised as the 2020 ‘Accountant of the Year’ at the Irish Accountancy Awards.

Our main speakers will be followed by a lively and topical panel discussion. Our MC for the event will be our own Geraldine King, ERF CEO. 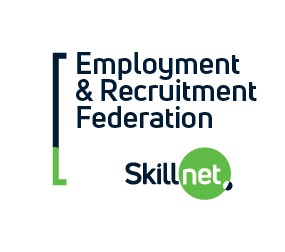